Discovering Extremadura region means taking a trip to the center of the old Spain. Where the Roman remains mix with the splendid medieval towns. It is located in the Western Iberian Peninsula of Spain. Bordered by Portugal to the west, Andalucia to the south, and Castile and Leon to the north and east.

This region has many attractions to discover. The best ones are the beautiful Gothic monuments, spectacular mountain scenery. As well as enjoying impressive architectures, archaeological sites, castles, and cathedrals.

Make sure to choose the Extremadura region as a destination to discover these 9 places. 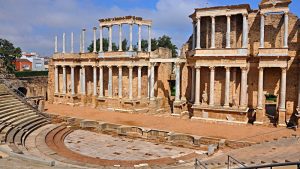 Mérida is the first destination that comes to mind when you visit the Extremadura region.

This town is full of magnificent Roman ruins and historic sites. One of them is the splendid Roman Theater. Built-in 15 BC to seat more than 6000 spectators and it still function as a theater.

Furthermore, there is the Roman Bridge with a span of 2,477 feet and 64 elegant arches. It considered the longest surviving bridge from Roman times. 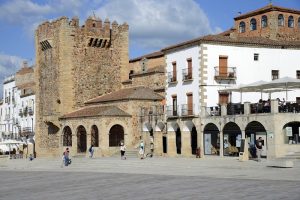 Cáceres is a magical medieval city in the Extremadura region. It takes you to the Middle Ages by its narrow streets, ancient mansions and palaces in the Old Town.

Cáceres has different attractions. The best tourist destination is the Plaza Mayor and the 16th-century fortress. Besides, there are other historical monuments like Torre de Bujaco, Arco de la Estrella, and Palacio de Toledo-Moctezuma.

Trujillo is another beautiful village in the Extremadura region. It is the best destination for the lover of culture and historic buildings.

This village filled with the 14th and 16th centuries castles, churches, and houses. Besides, make sure to climb the Old Town and find the well-preserved Castillo de Trujillo. Surrounded by the remains of the Muslim walls rebuilt after the Christian conquest.

Trujillo town has a cheese and wine museum. It held an annual cheese festival presenting hundreds of cheeses as well there is a bullring in the town. 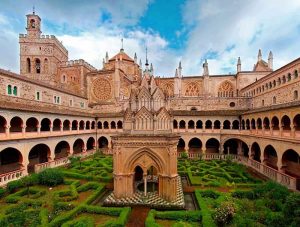 Guadalupe is one of Spain’s most famous tourist attractions. Known for its impressive heritage and beautiful gothic buildings.

This village has many areas of interest to discover. The major one is Royal the Monastery of Santa María de Guadalupe. It has a huge Mudejar cloister with a Gothic shrine and a 14th-century fountain built by the Moors.

Moreover, make sure to visit the center of the village. Surrounded with picturesque Gothic buildings located in narrow streets. 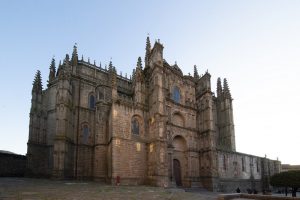 Plasencia is the largest and ancient town in the region of Extremadura. Surrounded by medieval walls and incorporates 17 towers and 8 gates as well as an Alcazar.

One of the main gateways is the magnificent Puerta de Trujillo o de La Salud. It gets you in the center of the old town and passing through the two main attractions. The first is the older Romanesque catedral Vieja contains a museum with works by Ribera. The second is the newer one the unfinished gothic Catedral Nueva. 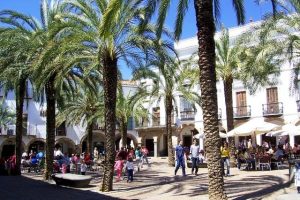 Zafra is another beautiful town located in southern Extremadura. This little town offers different attractions for you to discover at your leisure. One of the most magnificent places is the Plaza Grande square lined with arches all around it.

Further, down from the square, there are other historic buildings. Including La Candelaria church, the Iglesia de San Jose, and the hospital of Santiago. 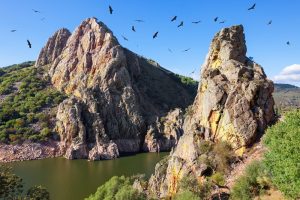 The Extremadura region has many historic sites, towns, and breathtaking architecture. But, more than 16,000 square miles of Extremadura is rural, with an enough of unspoiled natural beauty.

For nature lovers, this region offers different areas to enjoy nature. Like parks, nature reserves, protected landscapes, and biodiversity to excite any adventure seeker. The most famous park is the Monfrague National Park in Caceres with a natural beauty.

Each year, the Extremadura region hosts more than 80 festivals. There are different categories the religious or traditional based, and the cultural.

Badajoz is one of the most famous festivals in the region. Celebrated with vibrant colors, lively music, singing, dancing, and parades.

For art festivals, there are plenty in Extremadura. The popular one called WOMAD takes place in Caceres since 1992. As well as the Classic Theater Festival of Merida.

Moreover, the region has weird celebrations like El Jarramplas event. Where some locals dress up in a demon-like costume and play the drum while being pelted with turnips. As well as the Los Escobazos where the Immaculate Conception celebrated by hitting each other with brooms lit on fire. 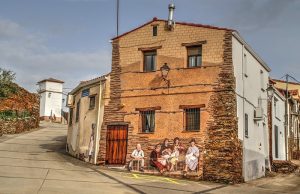 Romangordo is one of the most stunning villages in the Extremadura region.

This town converted into an open-air museum with more than 100 colorful facades painted by artists from the Colectivo Muro and by students of the Bellas Artes de Madrid.

While you are passing through the streets and admiring the paintings. There are other attractions, like the Casa de Los Aromas, the Ecomuseo del Tío Cascoles, and the interpretation center of the Ruta de Los Ingleses.