Spain is home to the most famous Spanish Artists. From the early 16th to the late 17th centuries, the country thrived in art and literature. And becoming a main major contributor to the European art world.

In this era, Spain produced the best-known artists that have influenced modern art like El Greco, Diego Velazquez, Zurbaran, and Murillo. Besides, the modern era includes the most influential artists are Joan Miro, Pablo Picasso, and Salvador Dali.

Check out our list below about the top 10 most famous Spanish Artists and Arts. 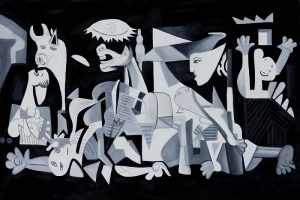 Pablo Picasso is one of the greatest painters of the 20th century. He started drawing at the age of seven. Additionally, he created the art movement Cubism. That revolutionized European painting and constructed sculpture.

During his career, Picasso changed his style and experimented with many theories, techniques, and ideas. As well, he drew around 1900 paintings; some of them are the most expensive ever sold.

Picasso’s painting career had several periods. The first called The Blue Period, characterized by a flurry of paintings. Second is The Rose Period of different shades of rose and brighter colors. The last period was fighting for peace and painting humanitarian images.

The Persistence of Memory Masterpiece(1931): 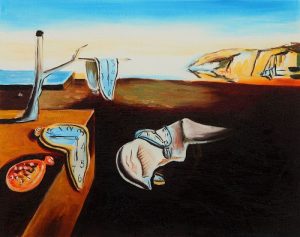 Salvador Dali is one of the celebrated Spanish Surrealist artists. Besides, He studied arts in Madrid, where he introduced to Cubism and Dadaism. Thus in 1923, he dismissed from his class because of his cynic attitude towards teachers. After that, he moved to Paris and joined Picasso.

Salvador Dali is well known for using bizarre images. Also symbolism to create landscapes of his inner world. If you want to discover some of his paintings, you can visit The Salvador Dali Museum in Figueres and His home in Portlligat to see his art. 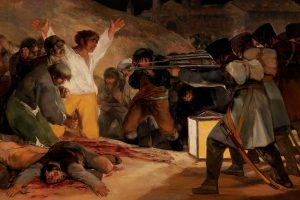 Francisco Goya is the most notable Spanish artist of the late 18th and early 19th centuries.

His dark paintings prove the real scenes of the lifelike war during the French conquest of Spain. As well as, it depicts intense, haunting themes, and showing both his fear of insanity and his bleak outlook on humanity.

You can discover his paintings in the Goya and the Prado Museum. His style became an example for later generations of artists. 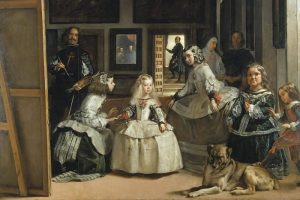 Diego Velázquez is one of the most popular and leading painters in European history. He was a Spanish painter for King Philip IV of Spain.

Furthermore, he drew many pictures of Spanish royalty. As well as painted some portraits of commoners. If you want to discover one of his paintings, Las Meninas is Velázquez masterpiece held at Prado Museum. 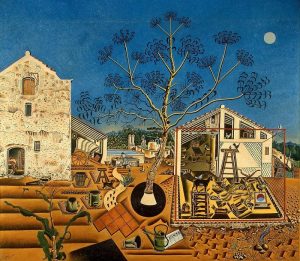 Joan Miro was a 20th-century Surrealism artist. He rejected rationalism and literary realism. Besides, he represented the beginning of Surrealism as an art movement. That encouraged artists to develop painting techniques. Also allowed the unconscious to express itself and imagination.

After World War II, he became a major international artist in the world of arts and His paintings are exhibited in many countries.

The Burial of the Count of Orgaz Masterpiece(1588): 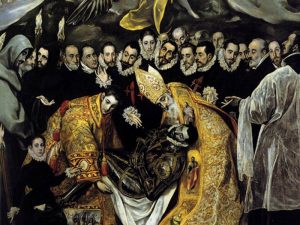 El Greco was the sobriquet of Doménikos Theotokópoulos from a Greek origin. He started his career in Italy. Later, he moved and lived in Toledo, Spain, until he died.

Furthermore, El Greco worked during the Spanish Renaissance in the middle ages as a painter, architect, and sculptor. Besides, his works about religious subjects, portraiture, and landscapes. As well as, he is a pioneer of both Expressionism and Cubism.

In the 20th century, he remembered as a unique artist. Who was not limited by any conventional school of art and had his style of work. 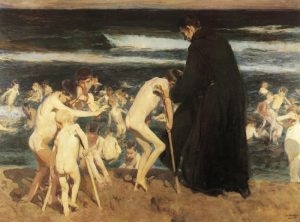 Joaquín Sorolla was one of the greatest Spanish artists of his time. Also, he associated with the Impressionism movement. Besides, He talented in painting portraits, landscapes, social scenes, and historical themes. His paintings are characterized by the bright sunlight and the Mediterranean coast.

Furthermore, he is one of the most productive Spanish painters. Creating over 2000 paintings. If you are interested in his works, you can visit his home and workshop in Madrid. After his death, Sorolla widow bequeathed many of his paintings to the Spanish public. 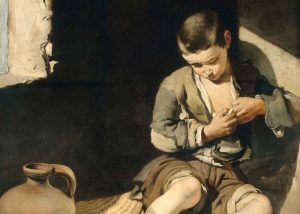 Murillo was a successful Spanish painter in the later 17th century in Spain. As well as in Europe from the late 18th to early 19th centuries. Velázquez and Zurbarán’s work influenced Murillo’s paintings.

Besides, Velázquez and Zurbarán’s work influenced Murillo’s paintings. Also he was famous for his religious and lively realist paintings of flower girls and street urchins. That gives an attractive account of everyday life in his times. 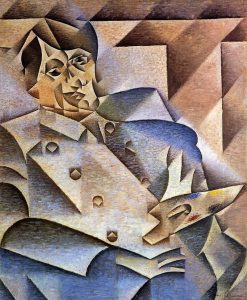 Juan Gris is a well-known artist of the art movement Cubism. He was born in Madrid and lived and worked most of his life in France.

Gris created his first paintings and sculptures by the analytic style of Cubism. Thus, he turned towards Crystal Cubism, which emphasized flat surface activity and large overlapping geometric planes. In contrast to Picasso and Braque, whose Cubist works were monochromatic. 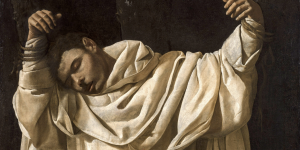 Francisco Zurbarán was the most celebrated artist of the Spanish Golden Age and the prime painter of the Spanish Baroque period. During his early career, he was affected by the chiaroscuro of Caravaggio and the naturalism of his contemporary Diego Velázquez.

Furthermore, he is known for his artistic expression of religion and faith. Recalling strong feelings of devotion and contrasts between light and dark.

Today, Zurbarán paintings existed in the collections of the Louvre Museum in Paris, the Hermitage Museum in St. Petersburg, the Metropolitan Museum of Art in New York, and the Prado Museum in Madrid.