The Basque Country is an autonomous region and located in the North of Spain and Southern France. It offers beautiful natural beauty, magnificent cities, and charming towns.

Get inspired by this list of top 8 beautiful places to visit in the Basque Country, Spain 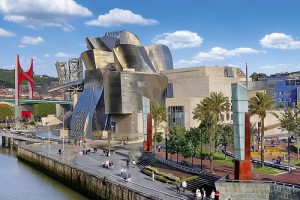 The Guggenheim Museum was inaugurated in 1997 in Bilbao. It is one of the world’s best museums, designed by world-renowned architect Frank Gehry.

This museum provides a massive display of modern and contemporary art. Besides, it is famous for its magnificent architectural curved building and its permanent collection includes works by different artists such as Jeff Koons, Mark Rothko, Jean-Michel Basquiat, and Miquel Barceló. 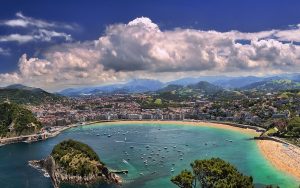 San Sebastian or Donostia is one of the most imposing cities located on the north coast of Spain. It is known for its stunning beaches that makes it the best summer destination.

The Concha Bay is one of the most famous and beautiful beaches in San Sebastian. It is praised for many things first its picturesque landscape, surrounded by green mountains. Second,  its calm water and a large golden sand beach that stretches 1350 meters. 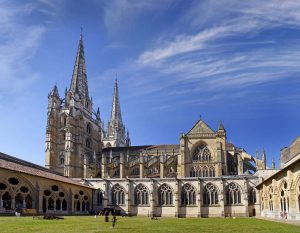 Saint Mary’s Cathedral was built between the 13th and 14th century with a gothic style. The chapels decorated with 14th-century style paintings and the stained glass windows made Chartres Cathedral style.

The cathedral is a UNESCO World Heritage Site.  Situated in the heart of the historic center of Bayonne on a mound overlooking the Nive and Adour rivers. This charming cathedral has the 9th century Bishop of Bayonne, which is a part of the French Pilgrim Routes of Santiago de Compostela. 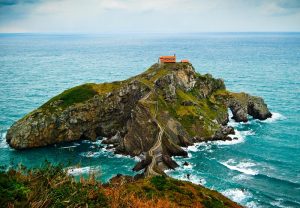 San Juan de Gaztelugatxe is a stunning island located between the coastal towns of Bakio and Bermeo. It is linked with the mainland by a stone bridge with 231 zigzagging steps that lead to a little chapel dedicated to Saint John the Baptist.

Furthermore, the chapel has been destroyed several times by fires, battles, and the unforgiving Basque weather. When you arrive at the church do not forget to ring the bell three times and make a wish that will bring you luck.

This magical island offers breathtaking views of the Basque landscape. Also, you can enjoy at the bottom watching the waves crash against the black rocks. 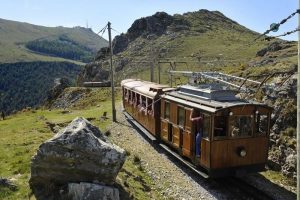 Take the little Rhune train to discover the picturesque panoramic view of the Pyrenees, the French and Spanish coastlines from the Rhune summit. This stunning train dates back to 1924, climbs up over 900 meters high.

The train trip lasts about 35-minute to the top. It passes through the wild natural landscape taking you to discover flora and fauna to the Basque mountain. Also, you can find small hardy Basque ponies roaming free, Pottoks, red-headed Manech sheep, and Griffon vultures native to the Pyrenees.

From the summit of the Rhune, you can see all 7 Basque provinces in France and Spain. The higher summits of the Pyrenees, the Landes beaches, and the Basque coast from Biarritz to San Sebastián. 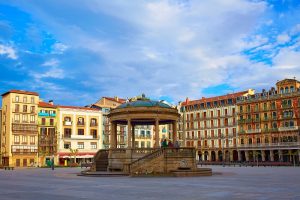 Pamplona is the capital of Navarre and Basque country’s second-largest city. It is a gorgeous place to discover its hidden spots and things to do.

The first thing to do is to participate in the annual San Fermin festival known as “the running of the bulls” that attracts  visitors from all over the world. Make sure to test the adventure against the powerful bulls in an early morning run for one week straight.

Moreover, do not forget to visit these gorgeous places like Casco Viejo Pamplona’s old town, the beautiful and historical gothic Santa Maria Cathedral. Besides, the main square, Plaza del Castillo, is a perfect place to discover the city and get to know the attractive Basque culture, people, and food. 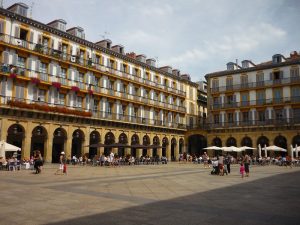 Constitution Square is located in the center of San Sebastián’s old town. Its construction was in the early 1800s, as a bullring square. Its remains still exist in each one of the windows of the houses. Some numbers mark the bullring boxes from which you could watch the bullfight.

After building a new bullfighting square in the Plaza de Toros, the Constitution Square was not used as a bullring anymore; however, it still hosts  San Sebastián’s biggest festivals. 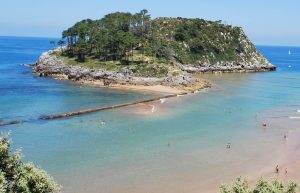 Lekeitio is a gorgeous fishing village located on the coast of Bizkaia, between Bilbao and San Sebastián. The town is an ideal spot to escape from the city. Despite its small size, it offers beautiful landscapes and magnificent places to discover.

The most curious place to start your day trip is to wait for low tide, and then you can make your way across the sandbar to San Nicolas Island. From the top of the island, there are magnificent views of the town, and be sure to get back before the tide comes back again.

Another impressive attraction is the Basilica of the Asunción de Santa María, which is the third biggest cathedral in Spain. It represents the best example of gold-plated Gothic architecture.